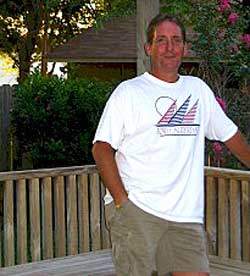 Kirk Acosta was born and raised in San Antonio, Texas and has been coming to Fredericksburg his entire life, as his family has a ranch near Willow City. Kirk’s grown up job is a synthetic organic chemist at a not for profit research organization. His foray into wood turning began about 5 years ago with the death of his father. Growing up, Kirk Acosta was surrounded by wood working and the associated wood working tools. In his retirement years, his father became a prolific wood turner. While he never

actually taught Kirk to turn, he got a feel for it by observing. Upon his death in 2000, his father had a finished piece on the lathe which Kirk parted off and finished the bottom. Shortly thereafter, he began to turn his own pieces and has become addicted.

The various forms that Kirk turns are dictated by the size of the wood, grain structure and the presence of defects (i.e. cracks, knots, bark inclusions etc.). These can provide for some very dramatic effects in the finished piece, either alone or through augmentation with a variety of fillers. Kirk finds it particularly challenging to turn pieces of wood that most turners throw in the burn pile.

None of Kirk’s turned pieces are identical, as no two pieces of wood are the same. The art of turning is being able to see the bowl or vessel that lies in that spinning chunk of wood.